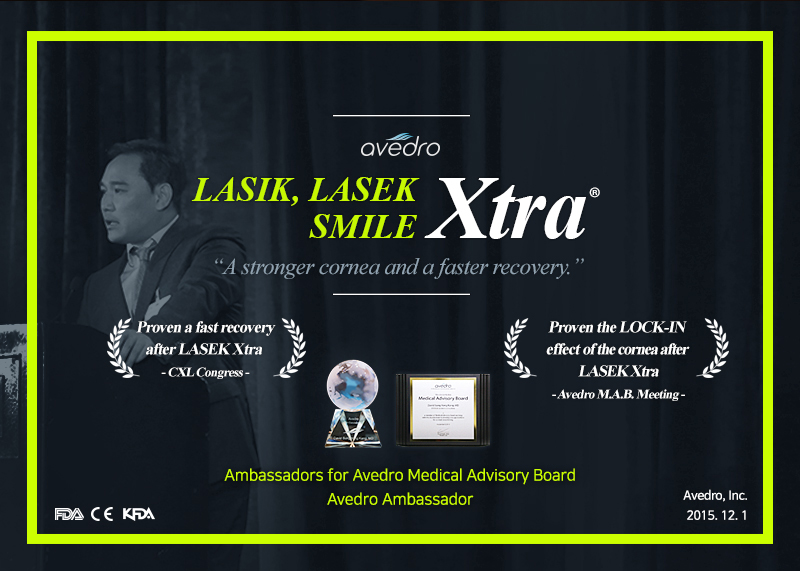 Increasing the corneal collagen cross-linking after LASIK, LASEK, or SMILE LASIK, Xtra® strengthens the weakened corneal tissue and minimizes side effects, such as keratoconus and vision regression. More than one hundred thousand procedures have been performed in 55 countries in Europe and North America. The KXL system of Avedro Inc. USA, which possesses the innovative technology of corneal cross-linking, has not only acquired the European CE mark and America’s FDA approval but has also received authorization from Korean Food and Drugs Administration. And it was EYEREUM to be the first to implement Xtra® in Korea.

Dr. David Kang(David Sung Yong Kang) was appointed as the only ambassador in Asia for the Avedro Medical Advisory Board, MAB, which consists of 15 world renowned medical specialists. He also presented the structural stability of the entire cornea and the corneal restrengthening/reconsolidation effects at international ophthalmology conferences such as the European Society of Cataract and Refractive Surgery (ESCRS), and Congress of Corneal Cross-linking. EYEREUM is leading the way to establishing international safety standards for vision correction. 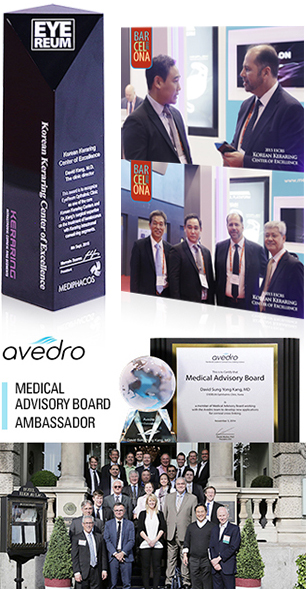 After any laser vision correction surgery, the weakened cornea can be the cause of keratoconus. The Avedro KXL system and riboflavin (Vitamin B2) eye-drops, VibeX, build up the corneal collagen cross-linking to restrengthen the fragile corneal tissues. For this reason, EYEREUM uses the Avedro KXL system after any LASIK, LASEK, SMILE Xtra® surgery to minimize any side effects including keratoconus and also insists on using the corneal collagen crosslinking for the treatment of keratoconus. 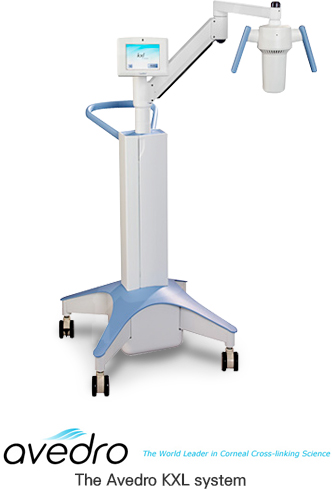 This entire procedure only takes about 2~3 minutes after any laser surgery. 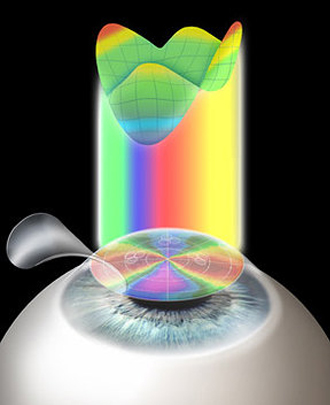 Dr,David SungYong kang is the not only the only Averdo medical consultant in korea, but the only consultant in Asia, Dr. David Kang(David sung-yong Kang) is the appointed specialist for 5 countries, working to establish internationally-authorized protocols and safety standards for LASIK LASEK SMILE Xtra®.

Last year, he introduced the benefits and the safety of Xtra® for the first time at Avedro Medical Advisory Board and also presented the studies of structural stability of the entire cornea and of maintaining corneal stiffness at international ophthalmology conferences such as ESCRS and CXL conferences. Furthermore, on Averdro’s official website, he explained that the light cross links the collagen fibers with the cornea, making it stronger, and ‘locks-in’ the LASIK correction. 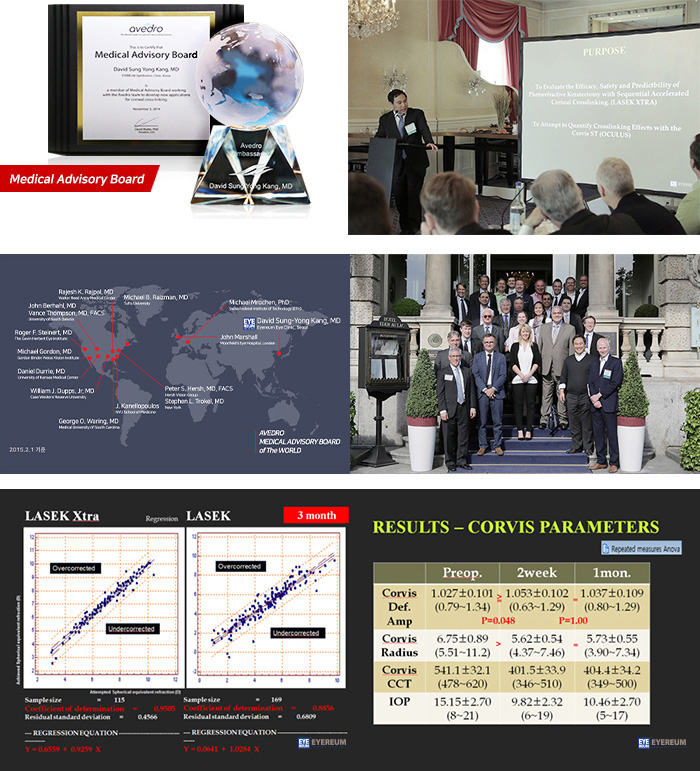 It is a procedure used in conjunction with standard vision correction surgeries to provide improved vision accuracy and long term stability. Xtra® restores biomechanical integrity and strength to the cornea after a standard laser surgery.

LASIK Xtra® which makes the cornea stronger and locks-in the vision correction is performed with Avedro KXL system and VibeX.

※ What is Collagen Cross-linking?

Collagen Cross-linking is a medical procedure that combines the use of UVA light and riboflavin eye drops to add biomechanical strength to the cornea. It is reported that the cornea is strengthened up to 150% as collagen fibers bond together. It was first used for the treatment of kerotoconus, however after its effects of preventing side effects such as myopia regression and kerotoconus were released, it has been used with vision laser correction surgery.

Xtra® not only prevents side effects but also lengthens the effectiveness of the surgery and thus enhances safety. It has already acquired the European CE mark and is performed in more than 40 countries including Europe, Canada, Japan, and Singapore. The London Eye Hospital in England, where Xtra® is performed to 80% of its laser vision correction patients, offers Xtra® as a ‘Golden Standard’ for all vision correction surgery. Also with more than 100,000 eyes treated with Xtra® worldwide, the safety is only confirmed.

※ Is the use of UVA light and riboflavin safe for your eyes?

Exposure to UVA light during a LASIK Xtra® procedure is the weakest of the invisible light rays given off by the sun. And riboflavin is naturally occurring in the body including the eye. Riboflavin is important for body growth and red blood cell production and has already been used as a photosensitizer in cross-linking for more than 10 years. Also being nontoxic, it has even been added to foods and used as additives in hospitals. So the answer to the question is ‘Yes, it is absolutely safe.’

Xtra® is a 3 minute procedure performed after the standard LASIK, LASEK, or SMILE eye surgery.

- Patients with excessive myopia (greater than -6D) and whose corneal removal area is large.
(The larger the correction area, the greater the risk for a weak cornea and keratoconus. Thus, Xtra® is most needed in patients with excessive myopia.)
- Patients with atopic dermatitis or those with thin corneas who have a risk of keratoconus after laser vision correction surgery.
- Patients who want to prevent keratoconus or improve their visual acuity/stability.
- Patients experiencing regression and undergoing retreatment.
※ Restricted against patients who are unsuitable for LASIK, LASEK, or SMILE.

Yes. LASIK Xtra® can be performed at any time after having a LASIK procedure to prevent myopia regression.

Generally yes. However depending on the riboflavin (VibeX) and UVA energy used with the Avedro KXL system, cross-linking can be used to either treat keratoconus or prevent it.

The precautions are the same as after any other standard laser surgery. There isn’t anything extra you should do after the Xtra® procedure.